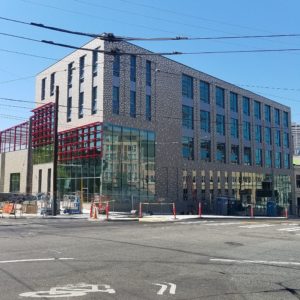 Goldfinch Bros., Inc. recently finished installing Schuco windows and sunshades for the Seattle Academy of Arts and Sciences (SAAS) building.  The structure, designed by LMN Architects, is being built in the Capitol Hill neighborhood and will provide spatial and flexible contemporary classrooms across its 74,290 square foot floor plan.

According to Estimator and Project Manager, Jenae Goldfinch, GBI installed 5 different shades of red sunshades on the SAAS building.  GBI also worked on the SAAS STREAM building, which was designed to exceed LEED Gold standards.  STREAM opened to students and faculty in September 2015. 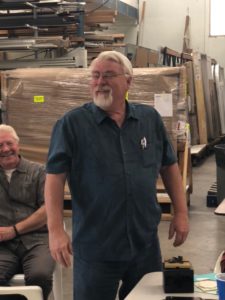 Dean started his career with Goldfinch Bros., Inc. in June of 1985 working first in the shop as an apprentice where he earned the title of journeyman glazier.  Later he moved into the office where he became both an estimator and project manager until his recent retirement after 33 years at GBI.  Geoff Goldfinch, Vice President of Goldfinch Bros., Inc. said about Dean, “When you take a moment and think about the fact that you have had the opportunity to have both a personal and professional relationship with an individual for that many years through a working environment, it becomes more than just business, it’s one of life’s treasured journeys!  We at GBI wish Dean all the best in his new journey in life – Retirement.”
On May 31, 2018, Geoff along with other GBI team members celebrated Dean’s retirement and his many years of dedicated service!

END_OF_DOCUMENT_TOKEN_TO_BE_REPLACED 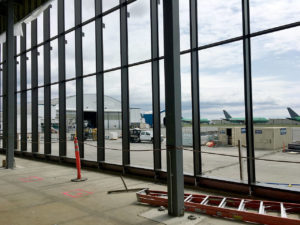 Goldfinch Bros., Inc. recently installed curtain wall for the passenger terminal at Paine Field in Everett.  The project, which is on schedule, is showing progress toward completion.  The two-gate terminal will have up to 24 daily departures from Everett offered by Alaska Airlines, United Airlines, and Southwest Airlines.  GBI was very excited to be a part of this local project.

Read more about the Curtain Wall Installation at Paine Field on Heraldnet.com

Fire-rated glazing is very different than it was a few year ago.  Higher code standards and customer demands for higher levels of security have driven innovation.  Juno Therapeutics in Seattle is a project that demonstrates the performance and aesthetic qualities fire-rated glazing now offers.

Read the article on Glass Magazine.

Goldfinch Bros., Inc. is proud to have been on the team that completed the Steve Ballmer Global Innovation Exchange Building — also known as GIX.  This 100,000 Sq Ft research facility is at 12280 N.E. District Way in Bellevue’s Spring District.  Goldfinch Bros., Inc. completed the facility’s exterior curtain wall as well as the interior tenant improvements.  GBI worked on this project with general contractor, Lease Crutcher Lewis, the architect, nbbj, and the owner, Wright Runstad.  Read more on the project here at gix.uw.edu/locations and at djc.com.

Read the article on Seattle DJC.

On November 3, 2017, three generations of the Goldfinch family and team gathered to celebrate 125 years serving Everett and the greater Northwest region.  Approximately 140 employees and family and friends of employees gathered to enjoy a catered dinner followed by a Silvertips game at the Edward D. Hansen Conference Center.

The dinner included the unveiling of the Goldfinch Bros. 125 Year Video and a raffle of GBI gear and gift cards.  You can view the video here!  It was a great evening to gather and celebrate each other, the longevity of the company and toast to the future.

After dinner the party moved to the Octane Lounge to watch the Silvertips win 3-1!

Over Labor Day weekend, CBS Sunday Morning aired a segment filmed at Marvin Windows and Doors’ Warroad headquarters, telling the story of what makes Marvin and the Warroad community in which it thrives so unique.

Goldfinch Brothers, Inc. is thrilled to be a part of another award winning project.  The North Seattle clinic, Neighborcare Health, Meridian Center for Health just won an award from the American Institute of Architects Academy of Architecture for Health. The AIA said the winning projects address aesthetic, civic, urban and social issues as well as the needs of a health care facility.

END_OF_DOCUMENT_TOKEN_TO_BE_REPLACED

Goldfinch Brothers is excited to support EnCity, a community that the Washington State University Solar Decathlon team is building for the U.S. Department of Energy Solar Decathlon 2017.  Goldfinch Brothers has helped cover much of the cost to get Schüco windows for EnCity.  Schücco is a Goldfinch Bros. partner with a strong emphasis on sustainability and makes some of the best insulated windows on the market.  Click here to learn more about EnCity.